Once we convinced the girls that, yes, we were ACTUALLY going to Disney, I gave them the speech. The “the moment, you own it, you better never let it go, you only get one shot, not to blow” speech. Okay, that was an Eminem song. What I really said was, “We’re going to Disney, and you better ride what you can while you have the chance.” It might not sell millions of records, but they took it to heart. They rode everything with gusto. EVERYTHING. 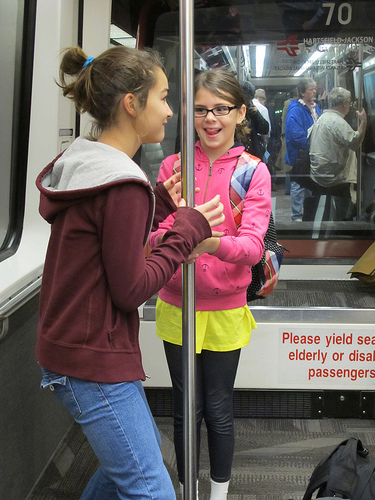 Beginning with the airport train to the gate. Hanging on is for sissies! 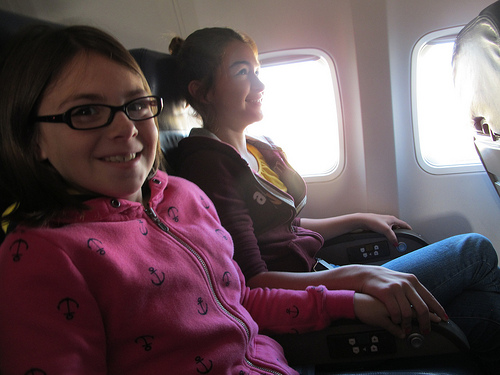 And we’re off! It was the first time either girl had ridden on an airplane. I told Moon previously that it was just like riding in a car. This photo was taken about thirty seconds before she informed me it was NOTHING like that. She was right. I can TEXT while riding in a car.

The first ride we hit in the park was Aladdin’s Flying Carpets. Neither girl was impressed despite the fact they could have fallen to their DEATHS. 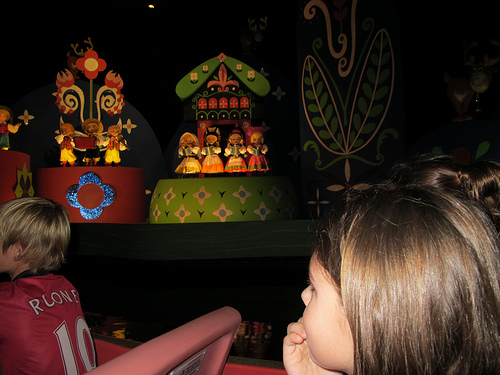 When I was 18, I went to Disney with my parents. This ride, It’s A Small World, was my mother’s favorite. I am much too young and hip to like it. I just went along for the kids. Twice.

The Race Car ride gave the girls a chance to perfect their driving skills. I rode with Rimfire while JD and Moon brought up the rear. Despite the fact that there were HUGE signs imploring people NOT to bump the cars in front of them, a certain person set a terrible example for another certain young child that will one day be driving HIS car and when she wrecks it and gets a ticket for following too closely I think we all know who I’ll blame. 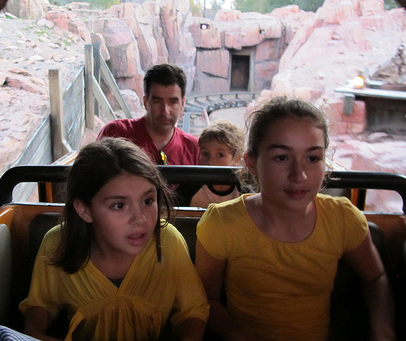 Moon is not a thrill seeker at all, so I was pleasantly surprised that she tried every ride we wanted to do at least once. This was a  roller-coaster called Runaway Train Thunder Mountain Goat or something. Hey, I walked 4 parks for 19 hours, I can’t be expected to remember everything. But this was Moon’s favorite ride and the first thing she wanted to do on Day Two. Which is weird considering THIS is the way she looked the first time she rode it.

Rimfire’s favorite ride was Splash Mountain. Kittens, I’m not going to lie – I hate the feeling of falling. And when I saw the FIVE STORY DROP that is the finale of Splash Mountain, I was hesitant. But I remembered the speech and jumped in the boat. The ride actually lasts about five minutes and includes a few small dips and drops, enough to get your heart racing. And it was during those drops that I developed The Theory. See, I figured that if I held my breath, the feeling in my stomach would lessen. Maybe, just MAYBE, holding my breath would tighten my stomach muscles and the terrible sinking feeling would go away.

Moon just thought she was about to die.