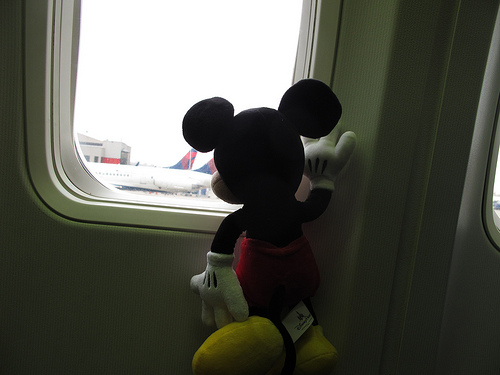 I asked Moon what she learned from our travels. Below are her actual tips, with editor’s commentary, of course.

Fly First Class. Being in the back of the plane stinks and we should know. We were in row 46 both going to Disney and coming home. There is nothing like sitting in the back with two kids eager for their first visit to Disney while 279 octogenarians try to wrestle gear from the overhead compartments. It didn’t take long for the kids to notice the people up front in the swanky seats. Moon said that’s where she wants to ride next time. Dream big, Moon, dream big.

Security is a pain, wear slip-ons. The girls could not figure out WHY they had to take off their shoes going through security.  I wasn’t about to tell them, but JD had no problems explaining, in detail, how a man once tried to set off a bomb in his shoe. Lovely. As if that weren’t bad enough, Rimfire got randomly selected for “extra security measures”. I thought they were about to give her the TSA Special, and got out my cell phone to record it for Drudge, but instead they said they would take the OLDER companion. As in ME. I didn’t get the pat down either, just a quick test where they swabbed my hands for bomb-making materials. Flying is so much fun.

Don’t sit in front of a screaming kid. A 2 year old boy behind us had had all he could stand of the flight and we got to listen to his displeasure the whole ride home. Well, most of us. JD somehow managed to sit across the plane all by himself, far away from said kid. Not so far that I couldn’t see him smirking though.

Pack your own bag. We didn’t check any luggage, instead opting to carry backpacks, one for each person. Since the whole trip was a surprise, I packed Moon’s. I’m more of the “Let me know if we forgot anything and I’ll show you how to live without it,” variety but that’s not my sister-in-law’s style. She packed for Rimfire and all we could figure is that she wanted to make sure she’d be okay if we got stranded in Florida for a week. And it snowed. Including what she wore on the plane, Rimfire had 2 pairs of jeans, 5 shirts, 3 pairs of shorts, 2 skirts and FOUR jackets. Once she bought souvenirs, it was over. We had to split her clothing up between the three of us to get her home.

And Moon’s final trip tip for a successful journey?

Sit by your cousin. 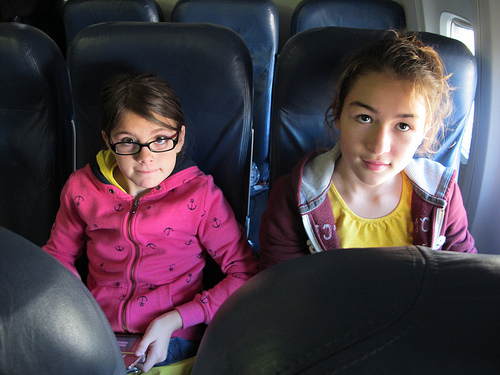 Just 9 years old and a traveling pro. Who needs Frommer’s when you’ve got Moon?