No matter what happens with my novel, it’s not the WORST book in the world.

I went to bed last night with a headache and didn’t feel like blogging. But I feel much better this morning. So, things I’m grateful for today…

33. I am head-ache free this morning!

34. A great weekend with my mom and aunt.

35. That my Uncle Tommy is feeling better.

39. I get to participate in Soup Kitchen tonight.

40. All the paperback books I found this weekend.

Psalm 16:7
I will praise the LORD, who counsels me; even at night my heart instructs me.

Moonpie took tennis lessons last fall, and while she enjoyed it, she didn’t insist that I sign her up for more once the session was over. It looked like she was having fun, but she didn’t exactly excel at it. So you can imagine my surprise when the coach called me last week and asked if she wanted to be on a team this spring. I said, “Uh, she’s not exactly…I mean she has trouble with…You remember her, right?” He laughed and said that yes, he remembered her and that she should do fine. That she had done well in the lessons, it’s a beginning team, and another girl on the team, (let’s call her HELEN) was also in the 4th grade at Moon’s school. How nice for her to have a friend on the team.

So yesterday, I took Moon over to the park to pay the team fee. As we were pulling into the parking lot, Moon says, “Mom, I saw Helen today at school and she said, “I was disappointed to hear you’re going to be on my team cause you’re not very good.” Yes, girlfriend went THERE. So Moon said, “Really? Well I was disappointed to find out you were still here. I thought once the nativity scenes were packed away I’d see a lot fewer asses!’

Okay, she didn’t say that, but how awesome would it have been if she had! Or at least, “I’m disappointed you’re on MY team cause you’re not very nice, so pfffft!” But no, Moon just stood there, like she always does, just smiling and being nice. Where did I go wrong??? Does sarcasm skip a generation or something? Geez.

Well, Kittens, you can guess how Team Tyre took Miss Smellen’s criticism. We’ve played tennis for the past two days, bought new balls, gone to the park, watched inspirational video’s, checked in on the Australian Open and practiced and practiced our serves, backhand and forehand strokes. 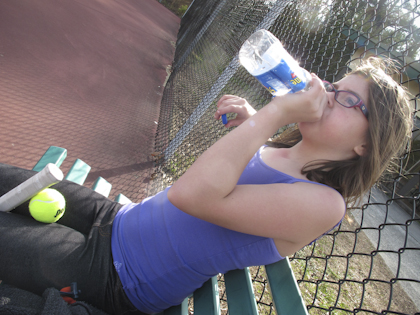 The coach is not going to know what hit him when Moonpie steps up to the service line and unleashes all of her pent-up competitive fury on the opponent. And by “opponent” I meant Helen, but you probably already knew that.

The Moonpie turns 10 today. TEN. It’s hard to believe it, but it’s true. I can hardly remember life before her; it’s like looking back on old black & white photos. Now we see everything in vibrant hues. Ten years ago, we didn’t know what to expect, just that we were overjoyed to be her parents. The night we found out she was going to be ours, JD sent out an email:

All glory and thanks be to God, the maker of all things on heaven and earth!!!

Lisa and I are so very happy and proud to announce that we have been chosen to be the adoptive parents of a baby girl! This is an answer to prayers from not just us, but so very many people, some I am sure we don’t even know about. But I wanted to give thanks to everyone I could think of that was praying without ceasing on our behalf. I am living proof that God hears the prayers of His children!! I am so richly blessed by knowing each of you that, though I deserve far less, I get more than I could ever dream. Know that I am humbled before you all, having received this gift of new life and hope and love and promise…..

I found myself driving along this morning looking at the world around me..the trees changing their clothes for winter, the birds making their plans for travel, the sun sticking to its promises, and the tears came down my cheeks at the sheer wonder of it all.. I have been made a new man by the mere thought of it. I didn’t even notice I was so happy until I could feel the warm spots appearing on my shirt. But happy I am! I sing with joy! I am swelled with a pride I cannot be ashamed of, for I know that what we are about to embark on will be an adventure completely impossible without God’s hand on our shoulder and our incredible church family at our side! I cannot thank you all, each and every one of you, with enough passion to let you know how your prayers were felt..and how your prayers petitioned God on our behalf. Now we are in full acknowledgment of His movement in our lives…we are on our faces with thanksgiving!

The joy we felt then hasn’t diminished, if anything, it’s quadrupled! It’s her birthday, but we’re the ones receiving the gift of another year with our girl. 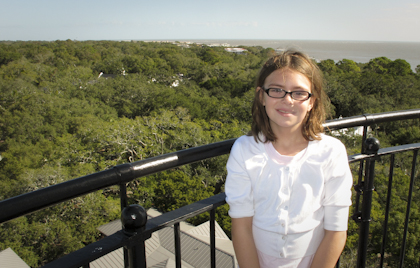 Happy Birthday, Moonpie. We love you!!

Moon’s birthday isn’t until Wednesday, but we had her party on Sunday with her BFF, Jemi. The girls are getting bigger now, TEN, so we kept it simple. A few games at Mountasia, then off to Jeanette’s house for the girls to play wii, eat dinner, and have birthday brownies. 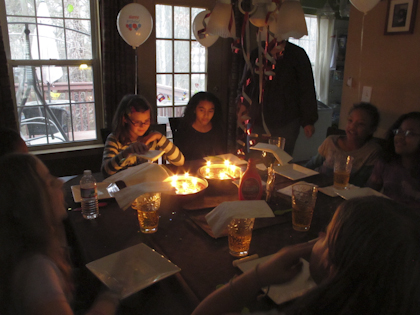 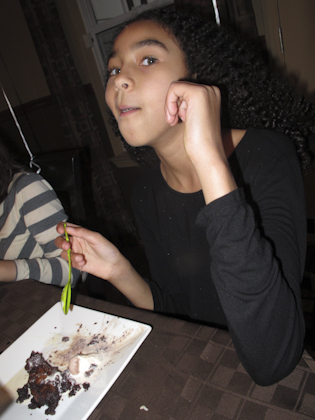 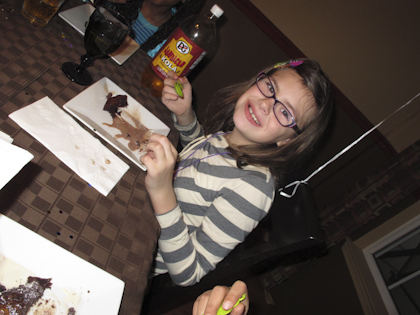 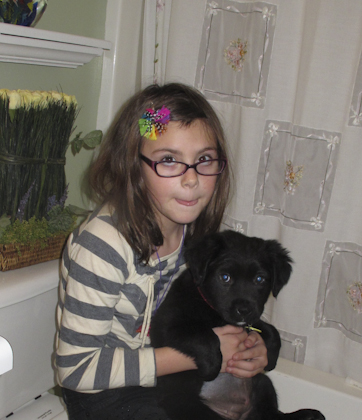 Jemi got a puppy for her birthday. Best. Present. Ever. The girls kept disappearing to the bathroom to puppy-sit. I think you can tell that the puppy was thrilled with all of the attention. 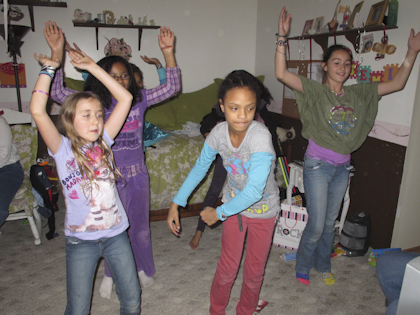 Just Dance was also a big hit. I had to watch for a long time to get a photo where most of them were doing the same thing. 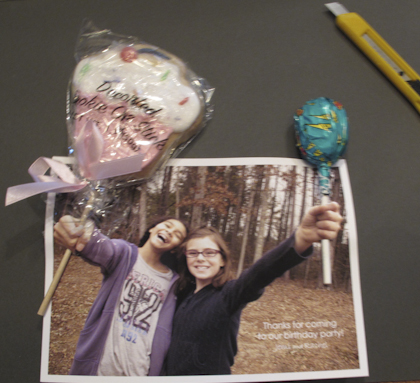 Every year, Jeanette and I struggle with what to give as a birthday favor. The girls are too big for toys, and most of the stuff they make is junk anyway. I found this 3-D photo idea online and we thought it was cute. Also, cheap. Moon and Jemi were born four days apart ensuring that Jeanette and I will split the cost of everything associated with their parties for as long as we can get by with it.

If you’re having a birthday soon, feel free to use any of these ideas. And also to join our birthday club. We’d be happy to split the cost THREE ways.

I was playing bridge last week with my ladies and they mentioned the Joy Journal, specifically, the absence of certain things on the list. How could I forget?

22. The awesome game of Bridge

23. That I can play bridge with my in-laws and bond together over the table.

25. That through bridge, I met the LOVELY Kathryn Yarbrough.

26. The fun memories made traveling with Patty to play bridge.

27. The fun memories made playing at the Ruff-n-Sluff with Carolyn.

28. The fun memories made over the bridge table with Vicki at her house.

29. The opportunity to play bridge with a pro, Richard.

30. I’m thankful for every Monday night the Lord gave me to learn about life from Katie.

31. The weekends at the cabin, win or lose, playing bridge.

32. That I have a husband who celebrates Father/Daughter nights, while I’m playing bridge.

“Every good gift and every perfect gift is from above, coming down from the Father of lights with whom there is no variation or shadow due to change.” 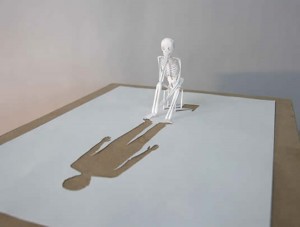 Art made from a single sheet of white paper. See the unbelievable images HERE.

Two typical days in the life of Team Tyre.

Day One:  It’s 7:15, JD, don’t you need to leave for the photo shoot? You can’t find your keys?  I’ll get out of bed and help you look. Not on the table, not in the clothes you wore yesterday. Go out and look in your truck. Nope, not there?. I’ll keep looking. Maybe I should look in your truck myself. Oh, there they are in the ignition! Now the battery is dead. Let’s jump it off. Good? See you later. Oh wait, it died? Jump it off again. Whew. Now I’ll go back to bed. Better check the phone one last time in case he forgot something. What’s that? You’re up the street at the stop light and I need to come jump you off AGAIN? Sigh.

Day Two: JD, you need to shoot the bracelet. You know, the one John gave me to put on EBAY for $1500? Where is it? On the table. On the desk. On the floor? WHERE IS IT? It’s FIFTEEN HUNDRED DOLLARS! FIND IT. Move everything. Look under everything. It’s MY fault? No, its YOUR fault! Maybe it’s MoonPie’s fault! Go look in the trash! Let ME look in the trash! Here it is, under the peanut shells and coffee grounds.  Sigh.

I’m guessing living across the street from WalMart is not going to help sell my house.

11. Freedom to worship without fear

17. Watching my daughter ride her bike

20. I worry about eating too MUCH food

21. A holiday from school means a day to spend with my daughter.

“Let the message of Christ dwell among you richly as you teach and admonish one another with all wisdom through psalms, hymns, and songs from the Spirit, singing to God with gratitude in your hearts.” Colossians 3:16