“And without faith it is impossible to please God, because anyone who comes to him must believe that he exists and that he rewards those who earnestly seek him.” Hebrews 11:6

“I mean, it clearly says: Without faith, it is impossible to please God. And I hate to say it….” I say it anyways. We’re family and this is the embrace of transparency.

“But not much in my life requires faith. I intentionally construct my life that way: do things I know I can do, with means I have, in territory familiar to me. But isn’t God saying that to please Him we need to live in this wild leap of faith?”

I woke up with a headache, which continued the entire 42 hour drive. Eating 8 Advils only seemed to make it mad. Our van may have had shocks at one point, but they’ve long since gone bye-bye. So basically I spent HOURS, trying to sleep in our bucking bronco of a vehicle, with a screaming headache and a chattering 8 year old, while my husband and two dogs fought over the cooler full of food.

But now I’m here, sitting in a chair with a heated, massage pad, fresh off my first Bloody Mary anticipating a full day of bridge tomorrow. It was so WORTH the drive.

This must be how missionaries feel when they travel through the dense jungle to find some unreached people group and finally get to share the gospel.

It’s that time of year again – time for a trip to the IN-LAWS.  Is there a scarier word in the dictionary? Sigh. It’s tough but I’m a good wife and do my best to get along with everyone. Even when they force their books on me, and insist that I lay down on the couch, I’ll just smile and nod. If I didn’t love my husband so much, I don’t know HOW I’d suffer through the beach, Bloody Mary’s and bridge.

Of course I’ll have to put up with them pretending that they don’t need us to stay an extra day or two, but I won’t be fooled. I’ll pack plenty of clothes. And sunscreen.

Awww. Hey, I HELPED. Well, I kept you out of the basement, that counts.

Barbie was enjoying church, but then somebody got upset because there wasn’t enough hymns being sung, and the worship panda quit, which caused Ken to leave in a huff and start his OWN church. It’s a mess. I blame the stuffed animals.

But at the last minute, everyone got saved and we held a baptism in the jacuzzi.

Tyre Town also became Jamestown, 1609 for awhile. This is the supply boat leaving England. England looks like fun. I should totally go sometime.

While the boat wasn’t large, it was loaded with food and that was all that mattered.

Alas, it was too late for these two. They died in the sickness shed.

I have no idea where she gets this stuff.

Yesterday, I took my McSkanky self down to the post office. I don’t use the word “skanky” lightly. I’ll be honest, we’d been celebrating the MoonPie’s birth for several days and frankly, a shower was just too much to ask. But it didn’t MATTER that my hair was uncombed and thrown up into a plastic clip from the 80’s. Sure I was renewing my passport, but I was armed with two, heavily retouched photographs courtesy of my husband. Imagine my delight when they told me that the photographs would not work, and that I needed to have my picture taken right then and there! Awesome. I mean, passports are only good for TEN years. What’s the worst that can happen?

If you really want to know how you look, have your photo taken by your local postal worker. against a plain, white wall under fluorescent lighting. Cool!

Wow, look at that beautiful contrast between the top of my head and the ends. And, ummm…these are the ones JD took where I had actually FIXED my hair. The ones the post office took are much WORSE.

I called my hair-dresser, Steven, and begged him to fit me in. Actually  I told him that I was walking around telling everyone that he’s responsible for my hair, and he rushed me right over. When he looked up my color in his files, turns out that I hadn’t been in to see him in over FIVE MONTHS.

I couldn’t believe it had been so long, but the photo doesn’t lie. I swore to Steven that I’d never wait over 12 weeks again.

So long sucker, I’ll see him in June!

Actually, it’s similar to how a 40 year old parties.

Alternate title – My Husband is a Genius.

So the Moonpie’s birthday is today. When we asked her what she wanted, the only thing she could come up with was a church for her Barbies. She already has the Barbie Townhouse and the Barbie Glamour Camper, but felt like they needed a church. Guess what? Mattel doesn’t MAKE a Barbie church. It probably has something to do with the fact that Barbie has no appropriate church clothes.

So, JD decided to BUILD one.

Complete with bell tower and steeple.

The church had to have stained glass windows of course. So we told Rachel that we needed to color some filters for dad’s camera. What can I tell you? She believes everything we say.

The Tree of Life, Adam and Eve

The Garden of Eden, Noah’s Ark…

Before he glued the steeple on, he hid a note inside. He wouldn’t tell me what it said. Probably something like, “I made this whole thing while your mother played Bejeweled on Facebook 342 times.” 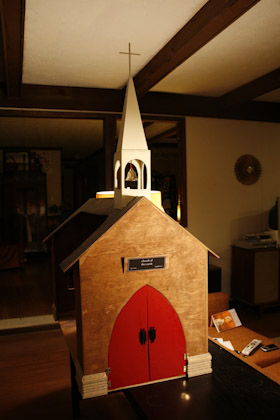 The sign says Church of the Lamb, Tyre Town and Population 6

See? Aren’t you sorry for chasing all those jocks around campus? Face it, art majors are awesome!

I googled “top ten reasons people don’t like Christians”, because I thought it would be interesting to see what we do to annoy non-believers. Turns out we annoy BELIEVERS, too. This is from the blog of a local pastor. FYI- I hear great things about the church, and know lots of wonderful people who go there. From www.TonyMorganLive.com –

Food for thought. Enjoy your Sunday!

Where is this sale? Why did we have to park so far away? Look at all of this parking. Did you read the sign correctly? We probably won’t find anything anyway.

Are we anywhere close? Look at all of these empty places. Are those people parking? Why did they get to park close and we had to walk? Can you see the house? I’m not expecting to find anything.

Is that it? I don’t see anything. Why do they have it roped off? I bet we don’t find anything. 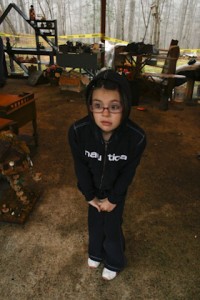 Why haven’t they opened the door? Did they say 9? The paper didn’t say 9. They could let us in, it’s cold. How much longer? 11 minutes? Your watch is slow. I don’t expect to find anything. Did you see a price? I can’t find a price on anything.

You got that whole thing for 8 dollars? She gave me the horse for free. Does your mom need help carrying all of her stuff? That outfit was only 2 dollars. Can we fit it in the truck?  How much longer will she be looking? I think she’s coming now. That wasn’t far from your house. Their prices were good. I liked that Hold table; that was a good idea. Who needs to go to the bathroom? Who’s hungry?

That was fun. How far to the next one?

Hmmm. Lots of gifts and toys..good food..laughter…driving to-and-fro checking the gps system…it can only mean one thing –

Mama and the Aunts are here!

Playing with a new toy..

Laughing at the general silliness…

Frankly, I’ve got no idea. But I rarely ever do when it comes to these three. All I know is it’s FUN.