My company sent me to a convention last week, so Team Tyre decided to use it as an opportunity to explore the west coast. We went a day early so that I wouldn’t be wiped out by the time change, and so we could look around, but mostly that last one. We had lunch in Coronado, sat on the beach in La Jolla, and ate in every restaurant in San Diego. After the convention, I watched my homegirl, Kyra, run a half Ironman. It was kinda fabulous.

At the convention I took a class called How to Blog with Consistency. I guess time will tell if it was worth the 1200.00 bucks. Spoiler alert: probably not. Other things I learned, every post should include a graphic:

Moon learned a lot on this trip. Like how celebrities will thwart paparzzi by wearing the same clothes over and over so that it looks like the photos were taken on the same day, thus limiting their sales potential. One night before dinner, I told her to wear my blue jean shirt in case it got cold. She didn’t take it off for five days. Unfortunately, it didn’t stop her dad from photographing her constantly. 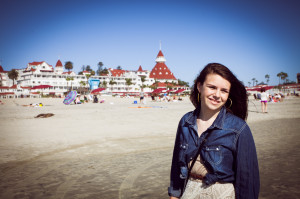 After the conference, we decided to drive to Los Angeles and fly home from there. It wasn’t my favorite city – WAY too many people, but I kinda fell in love with our hotel. 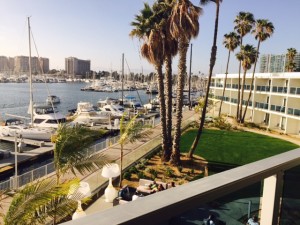 The view from our suite’s balcony overlooking the harbor in Marina Del Rey. You know you’re staying in the wrong part of town when you keep waiting for the concierge to tell you that your card has been declined. We were only able to stay the one night, but it was one, very awesome, night. As Moon said, “That was the best pullout sofa I’ve ever slept on!”

Hey, we didn’t want to spoil her with an actual bed!

Before leaving, we decided to show Moon how the 1% live by walking around Rodeo Drive. 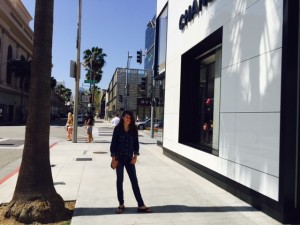 Then we showed her how the 99% live by gawking at everyone and leaving without buying anything.

Now it’s back to real life where my bedroom view consists of a Burger King and a WalMart. At least there’s still plenty of opportunities to gawk.

I expect my mother any second. Moon and I drove to Tennessee on Friday to visit with her, hang out, and drop off my dogs for the week. Okay, mostly that last one. Dogs? That’s right. Freeda has been trying out a new dog named FINLEY for a couple of weeks. Freeda likes him. I like him. Guess what two sour-pusses in the house don’t??

My mom and dad aren’t looking for another dog, but if one suddenly turned up on the mountain, what are they going to do, NOT keep him? You obviously don’t know my parents. 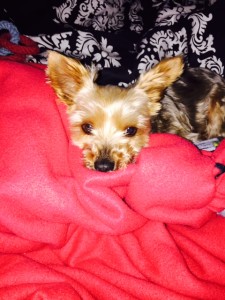 Besides, look at this cutey-patooty.

The only issue with this dog AT ALL is that his bark is slightly high-pitched. Imagine a squeaky wheel going around and around about a hundred times and played through a megaphone one inch from your ear. That’s not loud enough. But besides that, he’s perfect!

Freeda is much quieter. Her only issue is that when she was a puppy, she used to take off for long stretches. We started giving her treats every time she came in the door so that she’d figure out that coming home was a good thing. Now she tends to go out and in a lot. Imagine a revolving door going around and around about a hundred times except that you have to get up and hand the dog a treat every time she comes into view. That’s not aggravating enough. But besides that, she’s perfect!

Good thing my mom is known for being long-suffering and patient.

Hey, she never kicked Tania-the-Mad down the mountain. If she can put up with her, what’s a yapping, aggravating dog or two?

This is what I’m eating for four days:

If I get crazy, I’ll substitute the mango for 3 dates, add 2 tablespoons of cocoa powder and make it chocolate!

Why? Because it’s supposed to make me lose 8 pounds over 4 days. Why else???

I’m going to go out on a limb and predict a Moron Test Kitchen Grade of F.

Are you guys still here? I’d completely forgotten that I even had a blog. To be honest, I’ve been kinda nutso. I blame the time change. For the past two nights I’ve fallen asleep at NINE. This is putting a serious dent into my TV binge-watching time. (Have you seen the new Netflix show, The Unbreakable Kimmie Schmidt? Hilarious!)

But back to me. So this weekend I went to a BOARD meeting which is where I helped make serious long-term decisions about a local ministry. Yes. I. Did. You need a lot of skill to be involved at this high level like, being holy and nodding at the appropriate times.  Not everyone can pull it off.

Monday was a work day and I’m not sure what happened but I was in the WORST mood. Let’s retrace my steps. 1) Took Moon to horseback riding at 8 a.m., 2) Went to gym and rode a bike and lifted weights. 3) Worked 4) Went BACK to gym and did two miles on the elliptical. OH, I see now. EVERYTHING I hate (getting up early, not MOON) in one day.

Tuesday started off as bad because I made the mistake of weighing. I don’t know what I was thinking. I mean, sure I worked out TWICE in one day and had, gluten-free cereal and rice milk for breakfast, 3 boiled eggs for lunch and a salad with salmon, but it’s not like I was DIETING or anything. Of course I can’t lose weight like that! Who eats THREE boiled eggs? Stupid, *&$^%* pig!

The best part of today was that I received some essential oils from my sister. The LAVENDER is supposed to relieve stress. It totally worked. JD was having a bad day of his own and so I chased him around and put lavender on his ears. Laughing at other people really helps lighten the mood, amiright Kittens?

This week saw the start of a new bible study at my friend, Mantamy’s house. We’ve only had one meeting but I’ve already learned that Thessalonians refers to a place, Thessalonia, Silvanus is also Silas, and Ikea sells coconut covered chocolate balls that are to DIE for. I’m hoping the next eight weeks brings me a greater understanding of Paul’s letter. And also more of the desserts, cause seriously, they are YUMMY.

Mantamy, as I’m sure you remember, is the friend who’s taken me from India, to Paris, to the shores of Cape San Blas. I’m pretty sure I’m listed as a dependent on her tax return.  In fact, there’s a whole host of people are might be listing me on their 1040s. “I have always depended on the kindness of strangers.” Name that Movie/Play!

In keeping with my having the best friends EVAH, my friend and bridge partner Positive Patty gave the Tyres’ tickets to WICKED. It was fabulous! We learned that the Wicked Witch was framed, and that deep down inside, she was actually very good. That gives great hope to us that are related to Tania-the-Mad.

Moral of the story, my friends ROCK. You should look into getting some. (Just not mine – they’re taken! Why do you think I never use their actual names?) 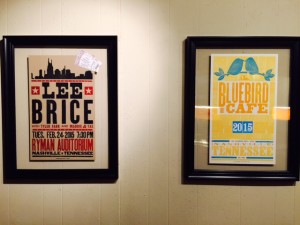 You’ve probably seen the photos of our trip to Nashville by now. I only uploaded one every ten minutes while we were in Nashville. I can’t help it. It’s my FAVORITE town. We’ve done some traveling together recently, and as much as we loved Charleston and Chicago – Nashville was by far my favorite. Which is amazing considering that during the first 20 minutes, I almost left!

Moon and I drove to Nashville via my mother’s house so that we could drop off the dog. By the time we got to the big city, JD had already booked our room. We had a miscommunication regarding parking, and my miscommunication I mean I was yelling and JD was yelling, and he had to come down and jump in the truck to tell me where to go. But it gets better! Then he instructed me to park in a tiny spot next to his rental, never mind that I was in a LAND CRUISER, which is why he was yelling “Just don’t wreck my car” when I backed into something. Oh, RELAX, it was just a transformer. So of course JD had to jump into the drivers side and park us. This is when Moon looked at us and calmly said, “Well, this is a disaster.”

Hey, it could only get better, amiright Kittens? And it DID. We had dinner at The Southern which was incredible. Seriously, if we could send their pimento-cheese grits to the Middle East, peace would reign!

Because JD was working, Moon and I laid around in the hotel room, used the wi-fi and stayed warm. I do have to work, you know! Then my cousin, Gingerbread came and took us to dinner at Chuy’s.. The food was great but the ride was most entertaining. Let’s just say that Moon learned a whole lot of new words. I LOVE my cousin, another reason that Nashville rocks.

Next, Moon found out her favorite duo, Maddie and Tae, were playing at the Ryman so I got on Craig’s List and found tickets. Two tickets. So she and JD went to the concert while I stayed in and caught up on Downton Abbey. Did I mention it was 28 degrees? I’m not crazy.

The next day we went to the Country Music Hall of Fame and Hatch Show Print – highly recommend both. THEN we hit the Bluebird Cafe where we listened to amazing singer/songwriters. It was so good I wanted to CRY. It was a beautiful, snowy night of great music. In short, NOT a disaster.

The moral of the story is that moms make everything better and if men wouldn’t yell, we couldn’t wreck. The End.