So the record for walking stands at two days in a row. I was prepared to head to the park but J.D. woke up with a little issue I like to call “breathing.”  After his “breathing treatment”, it was too late to go. Which is too bad because I was really thinking this might be the day I tried fast walking.

After JD started “breathing” again, we went on a photo shoot. I needed some new photos, he’s a great photographer,  all I needed was a good-looking model. 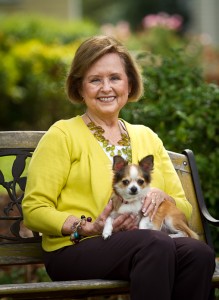 A great bridge partner AND a super-model, I have the best friends. And the best husband. When he’s “breathing”.

My husband and I have a new routine, and by “routine” I mean we’ve done the same thing twice. JD takes Moon to school, then we head to the park and walk. Here’s how you know if you’re old – if you consider WALKING exercise, then you are. Period. Face it, walking is only one degree from immobility. There’s standing still, and then there’s moving. But since my last attempt at running ended with me dry heaving and JD yelling, “Stay in the bushes, I’m a sympathetic puker,” I thought we’d lower our standards. On another note, it’s glad to know my husband is a sympathetic something.

Once home, I continued with my other routine of sitting on the couch and staring at my laptop all day until Moon got home. She had a science test and we’re still waiting for the result. I made her study despite the fact that she was all like, “What’s so bad with FAILING?” Seriously. After I explained all of the privileges that would stop with failing grades, I began to wonder, why I had ever bothered with good grades myself. It’s not like my parents could have taken anything away – there were three stations on TV and we did NO extracurricular activities. Geesh, I should have just blown it off worked on my hair more. Although I think the three hours a day was probably sufficient.

Moon has gotten into the routine of school, but for some reason her teacher has moved the desks into groupings of six and Moon is sitting elbow to elbow with five BOYS. And according to her, at least two of them are totally disgusting. One lifted his shirt and she saw his boy boobs. GROSS. I love how she has no interest in boys at all. Not exactly following in her mother’s footsteps. I was engaged in Kindergarten but we broke up because we both wanted to live near our moms. By third grade I had moved on to Jimmy Dishman, a definite bad-boy who called the teacher “woman”. As in, “I’m not reading that, woman!” 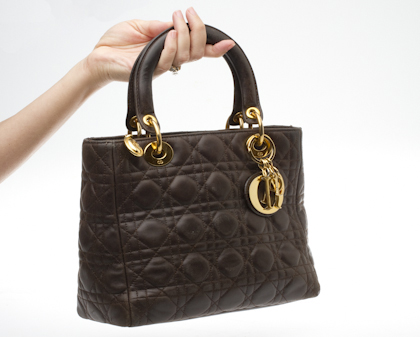 Do you remember this bag? My friend, Patty, asked me to put it on Ebay. It’s a Christian Dior cannage bag that she got from a very classy French lady who, and I’m not making this up, was a stand-in for Grace Kelly in To Catch a Thief. It didn’t sell for the Buy It Now price and it now sits in my closet waiting for the next move. *And by “next move”, I mean for Patty to forget all about it.

It’s such a nice purse. I can’t figure out why it didn’t sell.

*I’m just kidding. The bag is still for sale if you want it. It may or may not make old men walk.

Kittens, it’s Sunday as I write this, not yet dark, and I’m already in my pj’s wondering where the weekend went. I know I did something, it’s just hard to remember all the way back to FRIDAY. Okay, I’ll give it a try.

I remember that I got paid because the money literally burned a hole in my pocket. Seriously, what can a girl do, but run to Target? Moon and I were participating in a drive for the Atlanta Mission and you were supposed to buy an outfit, (pants, shirt, coat, undies) for a child the same age and gender as yours. I was convicted on the way in that I wouldn’t just buy the cheapest thing I found. I decided to think about it as if I was buying for MY daughter. Unfortunately, that also means the cheapest thing. So then I went for “what I’d want someone to buy MY daughter.” That works much better. 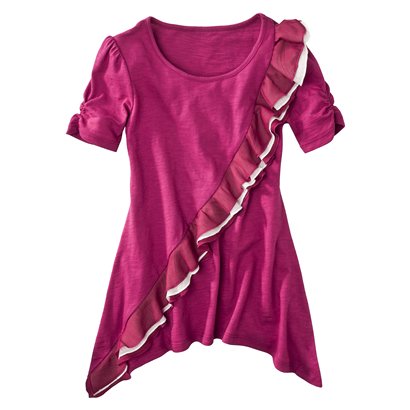 We found this cute shirt, some jeans, and a darling khaki trench coat. LOVE.

Moon didn’t ask for anything since her BFF had recently given her THREE bags of clothes. And they were GOOD clothes. Moon was totally shocked that Mr. Jordon, a  teacher at her school didn’t know who Michael Kors was and thus wasn’t at all impressed with her new shoes. Men.

After Target, we went to Menchies where I tried the non-fat, low-carb, no sugar added Cheesecake flavor. It wasn’t very good. Shocking, I know. We finally made it home and JD announced that he had also been paid, so off we ran to spend HIS money as quickly as we could. Luckily, the movie theatre is just around the corner so we had no trouble getting rid of all our extra cash. Kittens, Dolphin Tail is just too sweet. The last five minutes alone was worth the price of admission.

We spent Saturday cleaning house the Team Tyre way. JD took a huge load of stuff to the dump. Yeah, baby, YEAH! Another 20+ trips and we should be good to go.

Which brings us to Sunday. I left the house at 9:30 a.m. and got back home around 3:30 p.m., fell into the bed, picked up a Jack Reacher novel, and called it a DAY. It could be that church was tiring. Or it might have been the French onion soup with a side of Moon’s fries. Whichever.

Wow. My whole weekend has been summed up in less than 500 words. Not. Good. Maybe I should have mentioned my dream about Novak Djokovic? Still boring?

Okay. Let’s try this again. JD and I went to the movies and then this happened:

Lucky for them cause I was about to go all Jack Reacher on the room. Check back Tuesday when I go ice-skating with CIA agents. Or eat more carbs. Whichever.

One of my favorite blogs to check out every couple of days is called Catalog Living, It imagines life if the photos in your Pottery Barn catalog were real, actual spaces inhabited by people. An example: 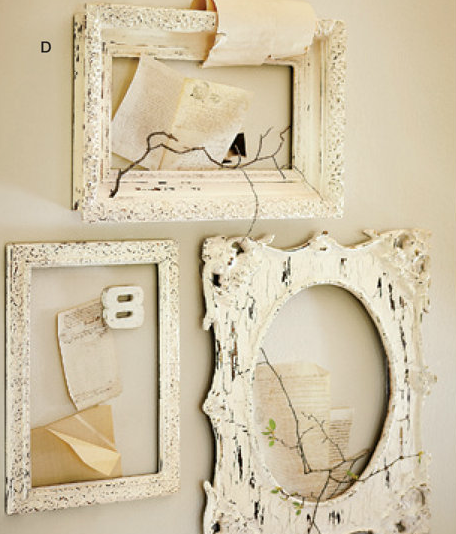 I can’t believe it took us this long to finally frame our twigs, torn book pages, and lucky number 8. (Pottery Barn photo) 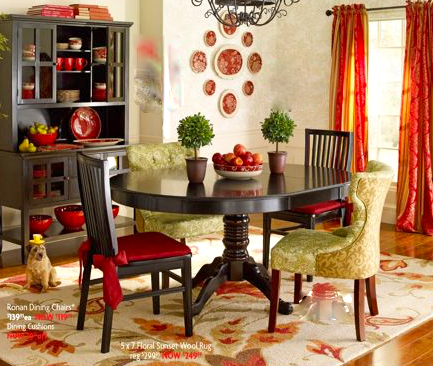 It was just Buster’s luck: finally perfect the cup-on-the-head trick and no one’s there to witness it. (Pier 1)

You’ll never look at your catalog the same.

Team Tyre has been pretty good this school year about getting Moon to school on time. Most mornings we leave the house about 7:30, plenty of time to get her there by the 7:50 bell. THIS morning, I barely had time to wake up and look at the clock when she was OUT the door. 7:00 a.m? That’s right, it’s Chick-fil-a Chicken Biscuit Day! I did note that it was awfully early since drop-off doesn’t even begin until 7:15. They got all the way to the sidewalk, standing there salivating over the breakfast sandwiches, when JD remembered he wasn’t carrying any money. They had to LEAVE, go to the bank, and come back. I might have laughed when he told me.

I did NOT get a chicken biscuit because I am determined to lose weight. I started thinking about how much I wanted to get healthy so I could be fit and active as Moon gets older. OR my mom told me that Tania-the-Mad has lost 10 pounds and is SKINNY, whichever. Either way, that will not DO. I’m not eating again until I lose ten pounds or my sister gains back her weight. I’m thinking sending THIS ought to do it.

Since JD took Moon to school, I said I’d go get her. I had a few minutes so I ran to WalMart. Where everyone decided to walk really slow, chat loudly on their cell phones and get in my way on every aisle. I really wanted to tell a lady that WALKING and TALKING at the same time was doable if she’d just give it a shot. But I didn’t because I had a holy conviction that she’d kick my booty. Just ONCE I’d like to be Elaine Benes.

I finally got to the check-out, let them ring up all of my purchases, only to find out I’d left the house without any money or my debit card. Team Tyre is nothing if not consistent.

I didn’t find it quite as funny as I had this morning.

It’s not all bad out there, Kittens.

Really. I was just BRAGGING on you people. I was thinking about how important it is to have people in your life who will speak TRUTH to you. Who’ll give it to you straight, let you know the real deal, when you’re going off track. And I thought you people were that for me. But then I see this: 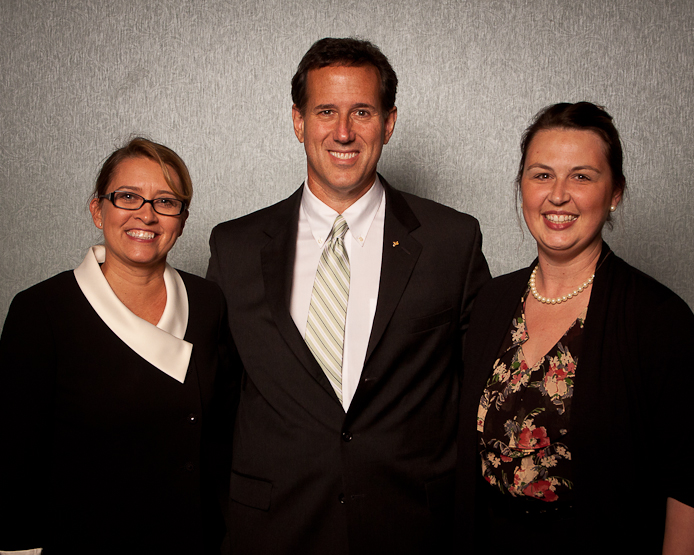 O.M.G. My sister-in-law is right there. Why didn’t she shove me out of the picture and say, “You really DON’T want a visual record of this.” Why didn’t one of the many people I saw that night as I strutted around saying “Haloo!” grab me, drag me to the bathroom and shove my head under a sink? Couldn’t someone have at least broken that plastic claw holding my hair or comb my bangs?

Why am I SMILING like that? I look like Ed McMahon just came through the door holding a big check and some balloons. There is no other reason to have that look on my face.

Snarky signs have been around the blogosphere and on Facebook, but I thought I’d post the ones I liked best. 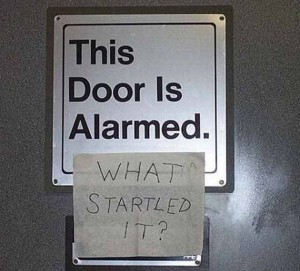 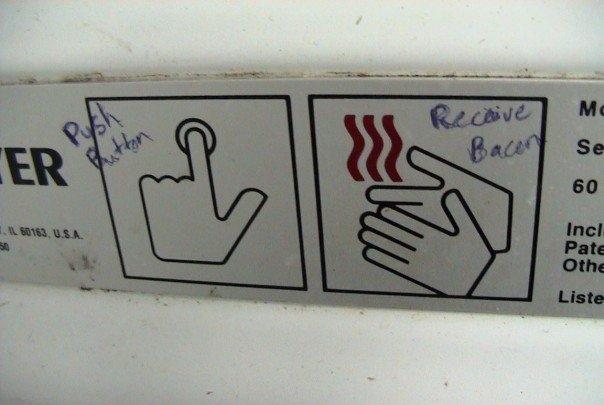 And you know I’m putting a sharpie in my purse right now!