I admit that last nights blog post ended a bit abruptly, but I had developed a chest cold and for the life of me I couldn’t figure out how to make that funny. I was smart enough to drink some cough medicine before bed and got the best night’s sleep I’ve had since 2002, which just happens to be the year Moon was born. The good news is that I feel better. The bad news is I still don’t know how to make my day funny.

I spent most of the morning working on the computer, then headed to WalMart to get a few things. While I was there I decided to get some cookies. Yes, I’ve been on a diet for months, but while I was at my mom’s she told me that she treats herself to one cup of coffee and a cookie each day. What’s good for my mom is good for me, amiright? I bought some butter cookies that were 140 calories per serving and one serving is EIGHT cookies. Awesome. I came home and ate FOUR, dipping them in some yummy hot coffee, then left to go about my business.

This is what I found when I came back: 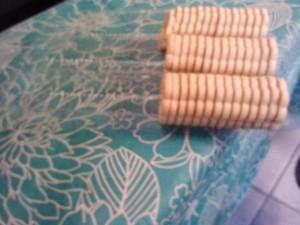 Over HALF of the box had been eaten. My conservative estimate is that someone ate FIFTY cookies. Initially, that someone tried to blame Moon, but I know something they don’t – Moon. Just a few days ago she tried a butter cookie and refused to finish it. The wacky kid doesn’t even LIKE butter cookies. The fact that the cookie eater has lost twice as much weight as I have over the last few weeks makes it even worse.

After the cookie incident, you’d think a certain someone would be too full to eat dinner, but since I made delicious rice and fake meat stuffed green peppers, they managed to find room. Not room for fifty, but still.

Instead of putting on my pj’s and resting on the couch like a normal person, I had to go to Moon’s new middle school for orientation. I ran into one of the other mom’s that I know only slightly. I’ve seen her a couple of times at yard sales, so of COURSE I asked if she was going to any this weekend cause there’s a bunch including Brookstone and my mom and aunts are coming here just for that so I’m sure she’ll be going, right?

Yeah, she looked at me like I was crazy, too.

Middle school is going to be a lot like elementary school apparently.