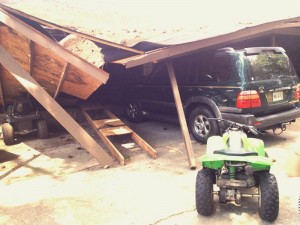 There are 100 things I worry about Moon doing – scary things like going to the bathroom at the movies by herself, or flying. But if I had listed last week all of the dangerous things she does, 4-wheeling would have been right behind showering and picking up pine-cones. Seriously. On a normal day, there’s a better chance she’ll slip while bathing or a tree limb will fall in our yard than of her wrecking on the 4-wheeler. I base this on 2 things. A) My extensive researched based on Facebook posts that show 99.9 percent of all 4-wheeling injuries happen to boys, and B) The girl considers trying new foods risky behavior. I can WALK faster than she rides. So where did it all go wrong?

We had high expectations for the weekend on Friday. I picked Moon up from school along with a friend for a sleep-over. First we went to a Girl Scout event where they cleaned out flower beds, dug holes, planted flowers and lay pine straw. It doesn’t get much better than that, amiright? Afterwards, I took them to O’Charley’s where they sat at there own table, laughing and talking and ordering a massive dessert. They told me to not even think about sending them to bed early. Girls. Gone. Wild.

They had so much fun on Friday, they convinced their mothers to let the fun continue all afternoon. They played Barbies, hung out on the swing-set, and rode Moon’s 4-wheeler. I went outside with JD to watch for awhile and it was all good, slow and steady as usual. Then I took her friend home at 2 p.m. This is when the trouble began. Moon wanted to stay at her friends house and play MORE. And because I am mean and enjoy making my daughter’s life miserable, I told her she couldn’t and would just have to come home and hang out with the family members that were all coming to the house for dinner, including her cousins, Alex and Nolan, who she ADORES and hasn’t seen since Thanksgiving. Yes, I am terrible.

Frustrated, Moon came home and decided she wanted to ride her 4-wheeler again. Here’s a parenting tip – Don’t let your children drive a 4-wheeler in a bad mood. Happy Moon slowly drives up the hill, makes a turn using the 40 yards of concrete we have at her disposal, then slowly goes down the acre of grass and turns around. Angry Moon flies up the hill, turns the corner, and guns it into a support pole, bringing half the carport down around her and traps her dad’s truck underneath the debris. Angry Moon is scary.

I was in the house when I heard a loud BOOM. For a split second I thought it was thunder and when I heard Moon and JD yelling, I opened the door thinking they’d been caught in a sudden storm. Even when I saw the roof, I didn’t get what had happened, instead thinking a tree had finally given up the ghost and landed on the house. Can I just tell you how happy I am that by the time I got outside, Moon was standing free and clear next to her 4-wheeler looking fine? Otherwise I’m pretty sure I’d be Kennestone’s newest cardiac patient. When it finally hit me that she’d been in the mess, I frantically began questioning her, “Are you okay? Does it hurt? Can you breathe?” Unbelievably, the girl didn’t have a scratch, not even a bruise! Thank. You. Jesus.

And the second I realized she was totally fine, I did what any parent would do. I took a picture for Facebook. 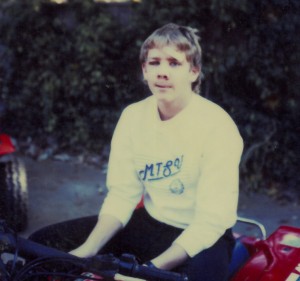 4 thoughts on “Yeah, So This Happened”