So Atlanta got some snow and this happened: 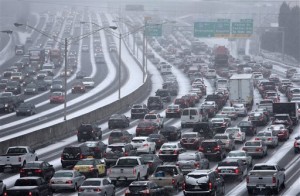 Every time the weather station predicts snow for Atlanta, Facebook status updates are either mocking, such as  “Time to watch everyone freak out and buy all the milk and bread”, or Southern slamming like, “Atlanta schools out because of 3 inches of snow while in Chicago we’re not even out for 3 feet!” So, of COURSE I didn’t go to the store when they began to call for snow because, lame. Which is why JD and Moon had to walk to WalMart for essentials like tortilla chips and boiled peanuts.

At least we HAD Moon. Cobb County decided that despite the calls for snow, they’d have school today. I checked the school website around 11 a.m. and noticed they were letting out early. A few minutes later, Moon called from the school to make sure I’d seen the news and was, in fact, planning on coming to get her. I’m glad she has such trust in my parenting skills.

Even though Cobb was releasing at  2:15, I sent JD out to get her about 12:30. The snow was coming down like crazy and it didn’t look like it would stop anytime soon. It took him an HOUR to go a mile and that was only because he found a back way around a closed road. But it could have been so much worse. Friends online were posting horror stories of being in traffic NINE hours, and Moon’s friend was still stuck at school at 8:30 pm! 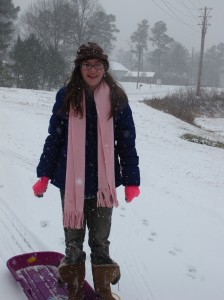 Moon was happy to be home but when she heard her friend was stranded, begged to get her 4-wheeler out and go and get her.  You might be surprised to learn I said NO. 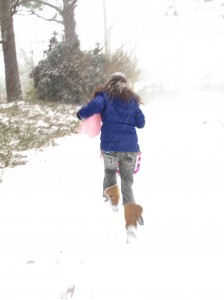 We played outside and ate junk food for dinner and prayed for the kids sleeping at school and the people stuck in traffic. I posted on Facebook that if anyone was stranded nearby, then could come over and hang. Someone was “this” close to taking me up on it, so close that I actually did a little straightening up – mopped, changed the sheets, vacuumed, did laundry – you know, the basics, but she found a ride home so never mind.

Cobb County decided after today’s snowy mahem, they’d go ahead and cancel school for tomorrow. Moon is THRILLED that she’s going to get to sleep late.

I’m sure the other kids will be too, as soon as they get home from school tomorrow and actually get INTO bed.