Last week, as I was thinking about another MTK – I came up with 3 goals-

So with that in mind, I’m posting on a TUESDAY, a BAKED Apple Tart from PW.  They’re just GOALS. Besides, if you attain your goals on the first try, I’m thinking you should set the bar a little higher.

Okay, PW claims she can make this Apple Tart in 5 minutes. So here goes.

BUY some apples. I bought eight and it cost me over FIVE DOLLARS. If I spend 5 dollars at the grocery store I better have 41 boxes of Ritz crackers. I’m not feeling this already. 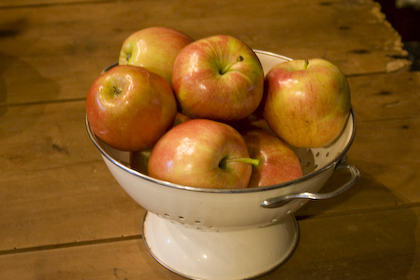 Next, BUY puffed pastry sheets. They come two to a box, and are in the section with pie crusts. Mine were made by Pepperidge Farms, and there were no coupons available. I searched a coupon database to make sure. Did you know a coupon database exists? Oh well, that’s another post.

Next, BUY an apple corer. Sigh. If you’d like to send in a dollar to help pay for this Quick and Easy Apple Tart ala Moolah, it would be greatly appreciated. I got a little carried away with how easy it was to core an apple and did  about six. Since I only ended up using TWO for this recipe, I’ve got a lot of apples laying around with brown innards. It’s kinda gross, I’m not gonna lie. 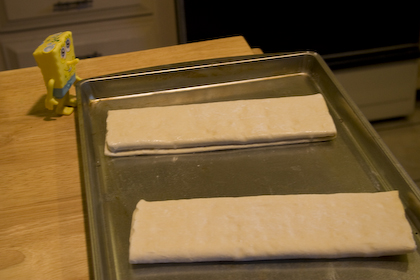 So take out one of the pastry sheets and let it thaw. Takes about 20 minutes. And yes, that’s Spongebob.  He’s not necessary to the recipe. Ignore him AND that other pastry sheet. I forgot that I only needed one.

Meanwhile, core 2 to 3 apples, cut them in half, slice thinly and throw in a bowl. PW says to squeeze half a lemon over the apples. I missed that part and used a teaspoon of lemon juice. I don’t know if that’s even close. Squeeze one to be sure. 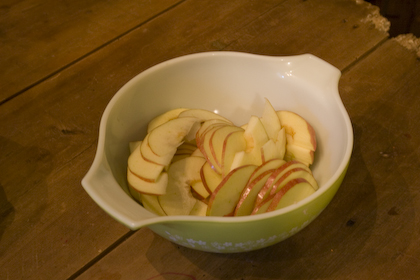 Sprinkle 1 cup of brown sugar and 1/4 salt over the apples and stir around to mix. 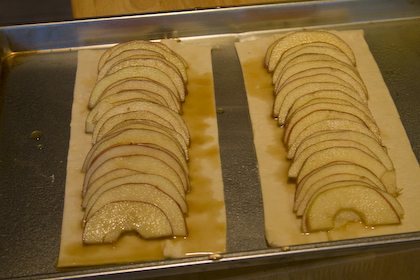 Preheat the oven to 415. Next, cut the sheets.  You can do 3 thin, or 2 larger. I cut it in half for the larger version. Place the apples, overlapping and stick in the oven 18 – 20 minutes. Okay, mine looks kinda yucky. That’s because I didn’t feel like they had enough brown sugar on them, so I just poured the remainder over them. I don’t know if that’s legal, but brown sugar is yummy, so I took a shot. 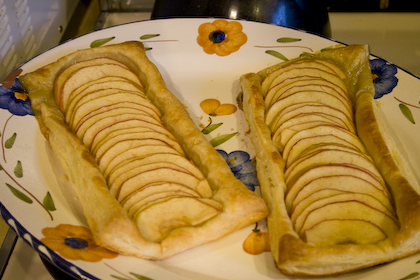 Voila. Now, to make it look way less ordinary, sift powdered sugar over them. I don’t have a sifter and I REFUSED to buy another thing so I improvised. Improvising is never a good idea for me. You know that screen thing with little holes in it that you use when you’re cooking bacon and you don’t want the grease to splatter everywhere? If one pushes hard enough, powdered sugar WILL go through it. 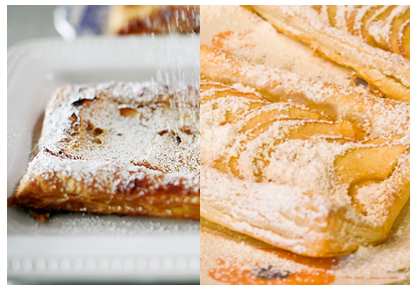 PW’s on the left, mine’s on the right. (Man. How is it that she’s a better PHOTOGRAPHER too? I went to a school for one thing – photography. I’m MARRIED to a professional photographer. Argggg.)

So this is what I ended up with. Mine was pretty good, especially cut thin, served warm with ice cream, as she suggests. But my apples were still a little crunchy. She obviously cooked hers  longer than I did. And she’s has a perfect, rectangle plate. And her pictures are better. But other than that, they’re exactly the same.

I give it a Moron Test Kitchen grade of B. It has potential, it is pretty easy, and I usually have apples on hand. If I had a square plate… this might be impressive for the amount of effort.

I’m planning a casserole for next Monday, but it’s not written in stone. If you have a recipe you’d like to suggest, just leave a comment. I’ll try anything that’s not TOO hard. And by too hard I mean containing over 6 ingredients and requiring things like “blanching” or “caramelizing”. You’ve got to  work with me people.

One thought on “Moron Test Kitchen – If I can do it, you can do it…”