So, mom is fine. I was finally able to talk to her today. It seems that yesterday she was EXHAUSTED from the surgery and the pain and all of the calling my sister was doing, but mainly that last one. She woke up feeling better today which proves what 8 hours of sleep and an extended period where TTM can’t call will do for you. She should be totally healed from the boob job, I mean GALL BLADDER (wink) surgery in another few days.

Speaking of boobs, what is up with the English? Seriously. While I’ve never been to London, I do watch a lot of BBC and lately I’ve been devouring the show, Luther. LUTHER is a cop, in London, where for the most part, cops don’t have GUNS. What is the point of having a copper without a gun?? Everywhere I look, on the fictional TV show, people are getting stabbed and clubbed and sometimes even shot, and Luther chases them down without a weapon. It drives me crazy. If I could get a gun and a really cool costume to England, I could be a modern-day superhero. “Stopping crime, foiling criminals – it’s GUN GIRL!”

Speaking of foiling criminals, are you getting hit on as you walk down the street? Would you like to walk around town without hearing those annoying catcalls? Then you need these: 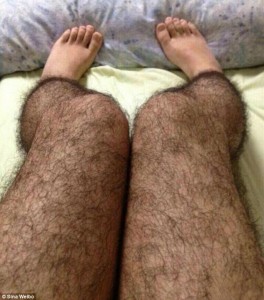 Pantyhose that looks like hairy legs! I think I’m going to give some of these as Christmas gifts for my friends that are too lazy to just let their leg hair grow.

Speaking of lazy, I’m going to bed. Tania-the-mad called me today, too and I am EXHAUSTED.