I had an unexpected surprise this week when an old friend came to spend the night. Kyra and I are a lot  alike, we’re both from the same hometown, we’ve both done triathlons, we’re both girls.

Sure her triathlons are more of the IRONMAN type, (2.4 mile swim, 112 mile bike ride, and a 26.2 mile run) but hey, it’s all swimming, biking and running right? Because I’m the best hostess EVER, I let her sit down for approximately 30 seconds before I began asking her what she eats, what exercises she does, how I can lose 20 pounds in 3 weeks, and if she knows any exercises that don’t require movement.

Kyra not only told me what to eat, she MADE me something to eat. 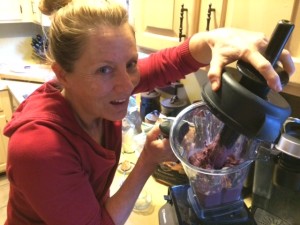 It was a mixture of almond butter and something called “organic fruit”. I’m not sure what exactly she did, but it was GOOD.

We stayed up late talking about food and exercise and how I really liked one of those and not the other. Then we drank wine and did a few abdominal exercises. Well, I did one and she did the other, but it’s all pretty much a blur.

Her visit couldn’t have come at a better time. I am thrilled to be inspired regarding my fitness especially so close to Christmas.  Maybe I’ll whip up a low-fat healthy Christmas dinner reminiscent of the one Tania-the-Mad did circa 1991.

On second thought, I’m still not over that one. Let’s give it another year or two.