Kittens, I’m reporting from Social Media Marketing World and the first thing I need to tell you is that the average age of Social Media people is 17. Which is also their average weight. Seriously, there was a woman on the shuttle yesterday that I could have picked up and put on my hip like a toddler.

Speaking of toddlers, JD and I are traveling with my good friend John. We left Atlanta at 3 pm yesterday and I have to say the worst part of the entire trip was the hour of airport time. John had back surgery a few months ago and can’t really carry his bags, or walk fast, two very important skill sets needed in an airport. At one point JD told him it was like traveling with an infant and we should get him a stroller. I just kept thinking, “Mantamy would KILL you.” Lucky for John, I am much more patient than either of them. Also, he’s funding my trip.

Because JD is along and paying his own way, I have to be careful that my expenses stay separate from his so that I can turn them in and I keep forgetting! I really wish they were paying for HIS instead of mine, because we’ve been here 18 hours and I can already see how this is going to go. JD forgot his toothbrush and while the hotel GAVE him one at the desk, he insisted on buying one. I went to pay for 1 Coke and 1 toothbrush and the total was almost THIRTEEN DOLLARS. Which I might have yelled across the store. The 17 year-old Social Marketers would have never yelled, they would have tweeted it. I have so much to learn.

I was a little grumpy by the evening because on the way to the hotel, I took a large step up into the shuttle van and pulled a muscle in my behind. If there is one part of the body that I use everyday – it would be my behind. Now it hurts to walk and sit and I was really planning to do one of those a LOT this weekend.

Last night the event hosted a party on the USS Midway which was actually pretty cool, and included lots of opportunity for “networking”. I networked the heck out of chicken pizza and chicken tortillas, while JD “networked” with some mushroom sliders and chocolate chip cookies. 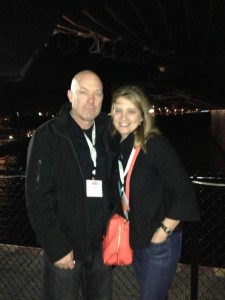 JD and I, networking near the buffet, on USS Midway

I did talk to one social media dude who explained what he did for 30 minutes and I’m still mostly unsure but I think he looks at your website, then finds authors in your field to write great content, and they put it on your website to increase traffic. Writing great content for your site to increase traffic? I am totally going to try that. As soon as my butt stops hurting and I can sit.