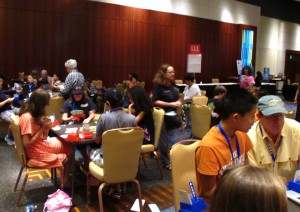 If you’ve spent any time around me, read this blog on a semi-regular basis, or seen my Facebook status, you know I’m crazy about bridge. It was a BIG thrill for me this weekend to see Moon and J play in their first sanctioned game. The fact that they actually won points made the whole thing even more fabulous! Still, I’m amazed at the glazed looks I get when I tell parents that they should consider teacher THEIR child. I’m sure you already know that bridge improves test scores, builds the immune system, and promotes inter-generational socialization, but here are a few more reasons why I love bridge as a parent that you might not have thought of.

Moon went to Bridge Camp last year, has taken several lessons at the local club, played three times at the Junior Nationals and spent ZERO dollars. The ACBL and Atlanta Junior Bridge do a great job supporting juniors and raising funds throughout the year, so the cost to parents is next to nothing. The only thing I’ve paid for is a $15.00 Junior ACBL membership – no league fees, uniforms or equipment! Even when you do pay, it’s not much. Moon could play at any of the local clubs for somewhere between $6 to $10.00 for 3 hours of bridge.

4. You can play bridge FOREVER and continue to improve as you age.

You can’t say the same for football, baseball, tennis, hockey, volleyball, skateboarding or gymnastics. You may be able to do all those things when you’re 80, but I bet your 18 year old self could kick your butt. In bridge, your glory days are always ahead of you. How awesome to fall in love with something and not have to stop when you graduate high-school!

My favorite thing about watching Moon and J play at the tournament was seeing them do something besides play Minecraft or watch TV. They used their brains, interacted face-to-face with other kids, and had fun! The tournament goodie bag included an autograph book and as each child came to the table, the girls asked where they were from, collected signatures, and even some emails! And despite Bridge’s “nerdy” reputation, the kids were all cute, normal and not one of them wore a pocket protector.

While I was showing the girls around the venue, a gentlemen mentioned how great it was to see kids playing, then he told us about a 16 year old who makes $3500 a week playing bridge! Clients have been known to pay $500 – $1500 to a pro for ONE session. Making it as a bridge professional is tough, but if you dedicate yourself, there is a chance that you could make a living playing cards. Let’s put it this way, the chance of a high-school football player making it in the NFL is 0.2%. Your chances are better with cards and there’s no need for the frequent CT scans.

1. In all of the years I counseled at the local pregnancy center, I never met a bridge player!

When’s the last time you checked in at the local skating rink? I was there one Friday night not long ago and I was shocked by the kids’ behavior. Yes, your daughter COULD sit on a boy’s lap at the bridge club, but I’m pretty sure the Director would put the kibash on that pretty quickly. And there would be no coming to the club and sneaking out to meet a boy. During the Nationals, one of the kids started complaining of a headache. The Director told him if he needed to quit he could, but there would be no leaving the room until his parent came to get him. I had no qualms about leaving Moon in the room to play while I went to my own bridge game.

Oh yeah, I guess that’s ANOTHER reason bridge for kids is so great – you can continue to play and not feel guilty for leaving the kids at home!

If you’re interested, check out www.schoolbridgeleague.org or www.atlantajuniorbridge.org for more!

2 thoughts on “Bridge for kids? YES!”